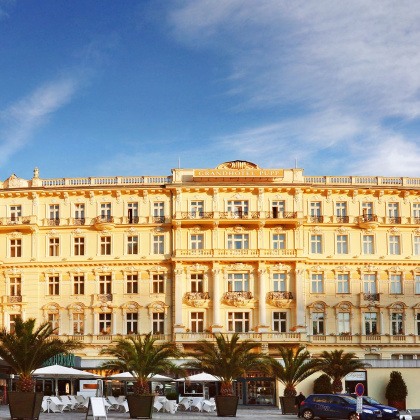 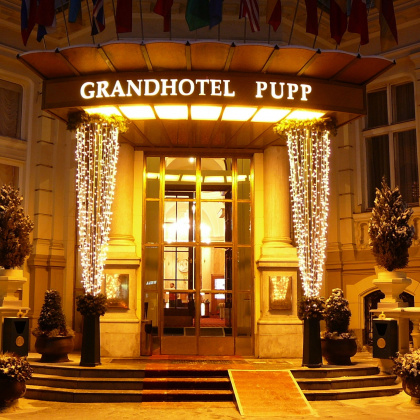 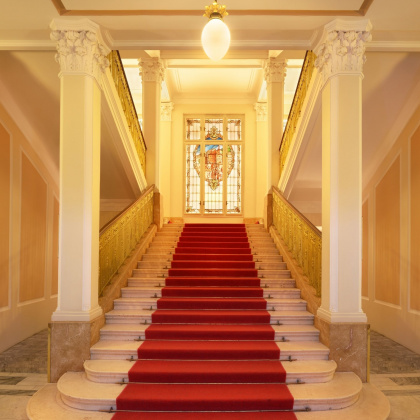 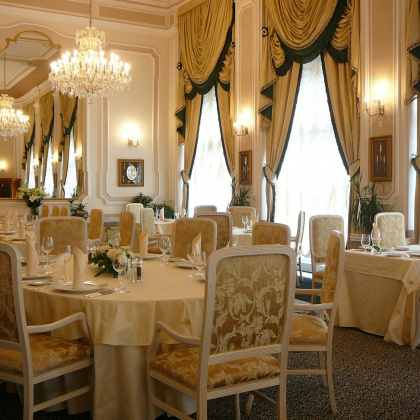 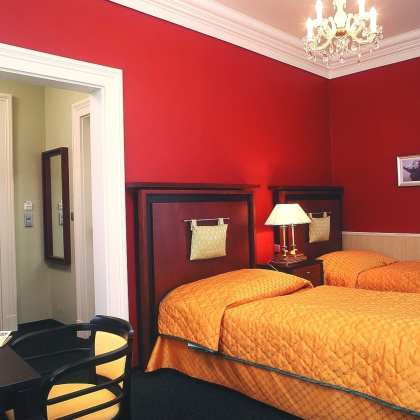 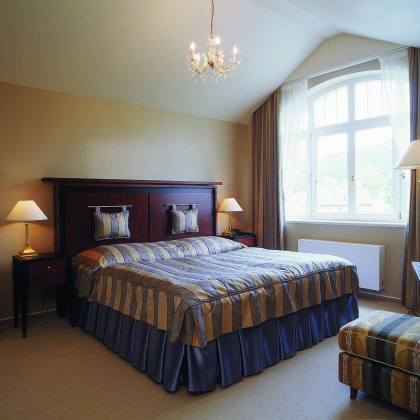 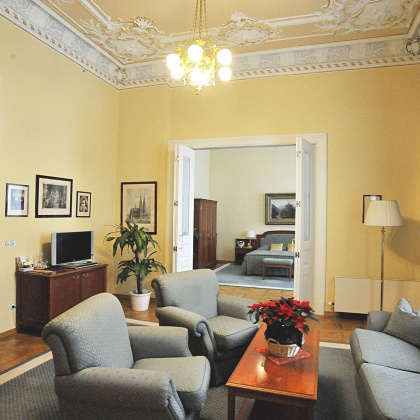 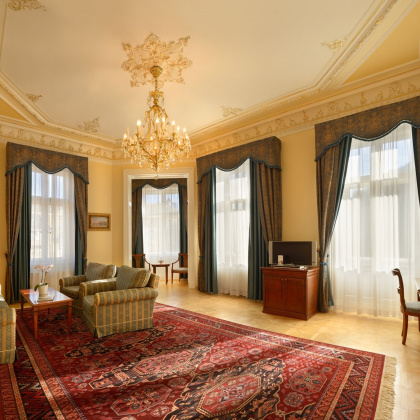 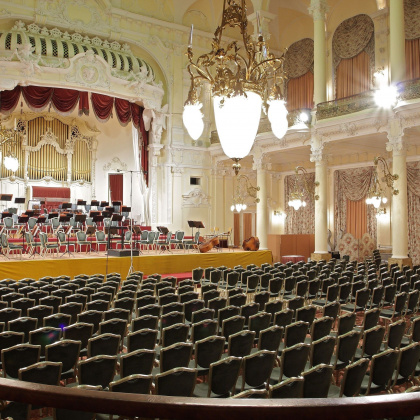 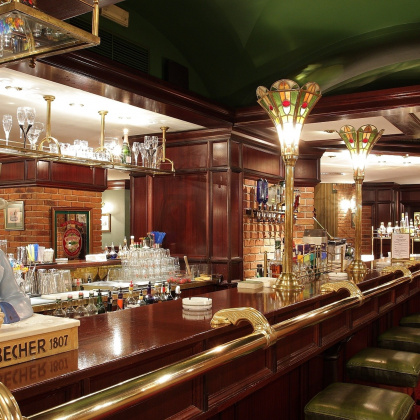 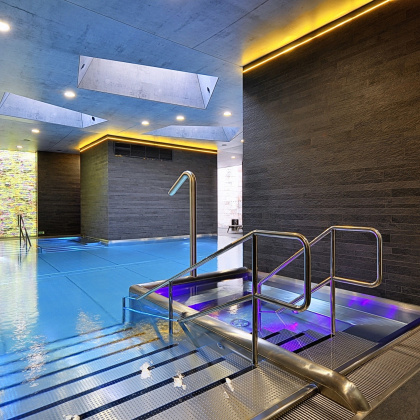 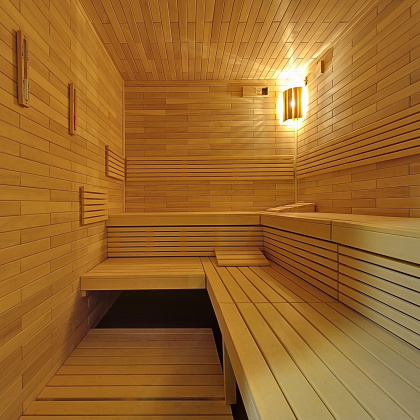 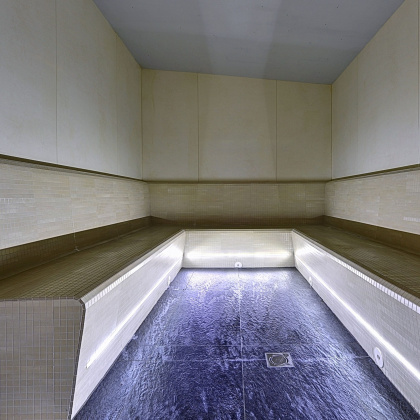 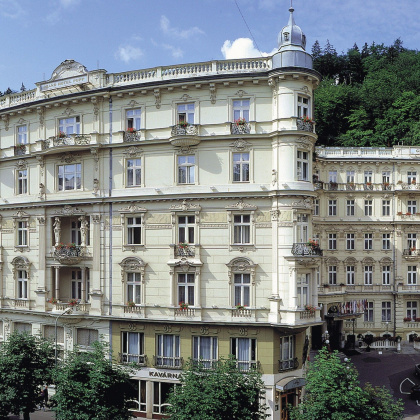 The world famous Grandhotel Pupp is one of the oldest traditional hotels in Central Europe. It is situated in a picturesque part of the west Bohemian spa town of Karlovy Vary.

The history of the Grandhotel Pupp dates back to 1701. In that year, the mayor of the town ordered the construction of the Saxon Hall; over time, more buildings were added and their further development is now synonymous with the name Pupp. Confectioner Johann Georg Pupp of Veltrusy arrived in Karlovy Vary in the service of Count Chotek in 1760. He showed his business talent in managing the Bohemian Hall and founding the renowned Pupp Avenue. The next generations of Pupps followed his legacy; the boom of the Grandhotel Pupp culminated with the purchase of the Eye of God House, which was added to the complex in 1936. Today the hotel embodies the atmosphere of the “good old times”. Even at first sight, it impresses with monumental crystal chandeliers, Art Nouveau stucco and rare paintings. The Festive Hall boasts a stained-glass ceiling designed by Alfons Mucha and a large concert organ.

Over the years, the atmosphere and hospitality of the Grandhotel Pupp has enchanted many famous celebrities, politicians, writers and artists. The list of people who stayed here includes the German poet and philosopher Johann Wolfgang Goethe, composers Johann Sebastian Bach, Richard Wagner and Antonín Dvořák, writer Franz Kafka and the Art Nouveau master Alfons Mucha. The Festive Hall hosted concerts by the violin virtuoso Nicolo Paganini and Ludwig van Beethoven.

Every year in early July, the Grandhotel Pupp becomes the centre of the famous Karlovy Vary International Film Festival. Film celebrities and fans of the silver screen fill up the hotel to the very last bed. The long list of its guests includes names such as Morgan Freeman, Gregory Peck, Sharon Stone, Robert Redford, John Malkovich, Antonio Banderas, Jude Law, Renée Zellweger, Susan Sarandon and many others who fell in love with the unique atmosphere of the hotel.

The Grandhotel Pupp, however, not only hosts movie celebrities - it has featured in many films, too, including the James Bond adventure Casino Royale. The building appears in the film as the Hotel Splendide, and sequences shot in Karlovy Vary (or “Montenegro” in the story) are part of the film’s special atmosphere. Exterior shots, dramatic moments at the hotel reception desk and action scenes in the car park have inspired many guests to stay at the Grandhotel Pupp.

In two connected buildings, River Side and Park Side, the Grandhotel Pupp complex offers 228 rooms in the categories of Comfort, Superior, Superior Plus, Junior Suite, Premier Suite and Apartment. The ground floor of the hotel features restaurants, a café, bars, a boutique zone and a hairdressing salon. Becher’s Bar and the Pupp Casino Club provide entertainment in the evening.

The Festive Hall of the Grandhotel Pupp and ten variable lounges offer exclusive facilities for your trainings, seminars, conferences and other company events, weddings or family celebrations.

Current situation regarding COVD-19 in the Czech Republic.

Foreigners without residence permits are not allowed to enter Czech Republic except necessary reasons. However, vaccinated nationals from Croatia, Hungary, Germany, Poland, Austria. Slovakia and Slovenia can come and play golf in Czech…
06/30/20

COVID 19 in the Czech republic

From today, UK citizens do not have to worry about neither PCR test nor 14 days quarantine. However, it depends on the situation of UK. If the situation of COVID-19 gets extremely worse, the government might ban the entry. The life in Prague is…

The Evolution of Your Golf Experience